What is the evidence that depression is a medical condition?

What is the evidence that depression is a medical condition? 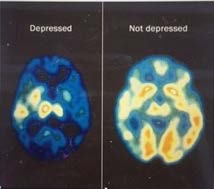 We can see differences in the brain of depressed and non-depressed people through special tests.

One test used for psychiatry research is the PET study-Positron Emission Tomography. This is a machine that measures body tissue metabolism. All body tissues use glucose, a naturally occurring sugar. A person having a PET study is injected with a tiny amount of radioactive glucose. (The amount of radiation is no more than that of an ordinary X ray.) The PET scanner measures how the brain uses the radioactive glucose. The person being tested is awake and alert, lying on a couch with only his or her head in the machine. S/he may be given a task to do, such as looking at pictures or reading a book. This provides a working map of how the brain is functioning.

Another test used in research is functional magnetic resonance imaging (fMRI). MRIs measure magnetism in the body’s molecules. This method takes advantage of the fact that blood flow to the brain changes with brain activity. The blood vessels bring oxygen to the brain and release it into the tissues to provide the brain with energy. Blood with and without oxygen have different types of magnetism that can be measured by the MRI machine. MRI machines use a

PET Scan Images of Depressed vs. Non- Depressed Brain magnetic field to provide detailed pictures of bodily tissues. If a person performs a task while being measured in the fMRI machine, the part of the brain that performs the task can be localized.

An MRI machine is a large magnet shaped like a tube. The patient must lie very still in the tube for several minutes to get an accurate picture. It is not physically painful, but some people become anxious and restless enclosed in a small space for so long. Patients cannot wear metal in the MRI tube due to the strong magnetic field, even heart pacemakers or hair clips.

What parts of the brain are responsible for depression? Studies have found abnormalities in the prefrontal cortex and limbic system (hippocampus, striatum, amygdala, cingulate gyrus and thalamus).

The prefrontal cortex is a very important brain region. It’s located at the very tip of the brain, just behind the eyes and forehead. This is the area of the brain that controls impulses, sexual behavior, language, working memory, and socialization. Executive functioning is contained in this area. This includes the ability to problem-solve, choose the best option among many choices, control impulses, plan, control and perform a behavior, recognize future consequences of current actions, chose between good and bad actions, suppress bad social responses, delay gratification, determine similarities and differences, and adapt to new situations. For example, if I told you to get together a group of friends and plan the party of the century with an egg, a trampoline, and some tissue paper, you would need your executive functioning to carry this off!

The prefrontal area contains many connections with the limbic system, the area buried deep within the brain that regulates emotions, learning, memory and stress response. Areas of the limbic system include the hypothalamus, pituitary gland, hippocampus, amygdala, cingulate

gyrus, and parts of the thalamus. The amygdala is involved in emotions, learning, and memory, particularly fear and anxiety. It is a type of “alarm system” for the body, alerting it of danger. The hippocampus helps to form and store long-term memories. The cingulate gyrus helps process conscious emotional experiences. The thalamus is a “gatekeeper” that receives messages from the senses and transmits the important ones to the cerebral cortex. It also receives information from the cerebral cortex and sends it to the brainstem and other parts of the brain.

The hypothalamus regulates functions such as sleep, appetite, sexual interest, body temperature, and pituitary gland activities. It releases a hormone (corticotropin-releasing hormone, or (CRH)), that causes the pituitary gland to release a second hormone (adrenocorticotrophic hormone (ACTH)) that causes the adrenal glands to release cortisol, the stress hormone we mentioned earlier. Cortisol is part of the body’s “fight or flight” reaction that helps us when we need to move quickly when we are in danger by increasing blood pressure and blood sugar.